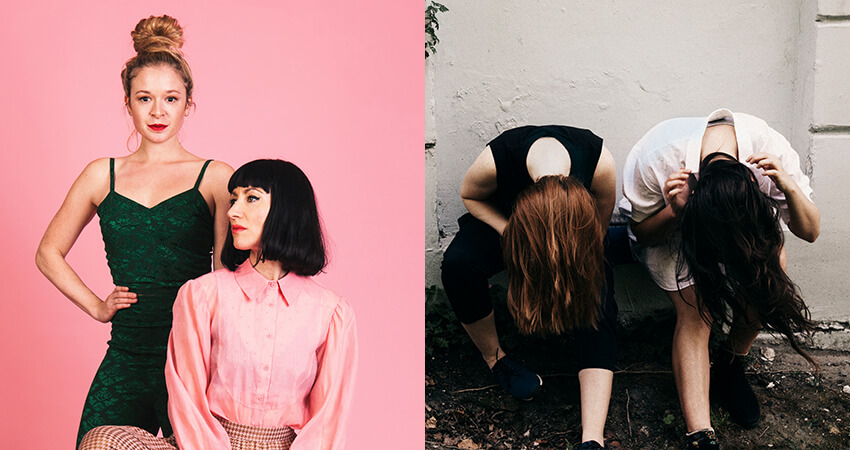 Music lovers! We are beyond excited to be able to reveal another event that will be happening as part of our 2019 festival, and it’s a very, very special one.

On Friday 27th September, we’ll be bringing together some of Europe’s most innovative contemporary musicians & composers for a night of mesmerising cinematic neo-classical music, held in the beautiful surrounds of St. Nicholas’ Church. The event will feature two newly-formed duos: AVA, formed of world-renowned violinist Anna Phoebe and Berlin-based pianist Aisling Brouwer, and, in what will be a UK premiere (!!), a joint set from Brussels-based composer & filmmaker Christina Vantzou and Warsaw-based cellist Resina. It promises to be a memorable event.

Find out more and have a listen to the artists below, and book tickets through the link at the bottom of the page (or HERE, if you’re already sold).

AVA
AVA is a cinematic instrumental duo formed by Anna Phoebe and Aisling Brouwer. Both acclaimed composers in their own right, the two met in 2016, and their mutual love of writing for film, art and dance inspired a musical journey that evolved into a new collaborative project. Together, their music invokes melodic and emotional soundscapes, with the relationship between violin and piano at its heart.

Anna built her career as a violinist, touring at the highest level with multi-platinum selling bands. She has performed as solo violinist on top international stages and festivals across the world including Royal Albert Hall, Royal Festival Hall, Glastonbury, Fuji Rock Festival and Montreux Jazz Festival. Recently, Anna’s main focus has been working as a composer and producer on cross-genre collaborative projects, with dance, film, art installations and bio-scientific research. She currently works as a composer for the Royal Ballet School. Anna continues to perform live with artists such as Nitin Sawhney and Erland Cooper.

Aisling is a Berlin-based ambient classical producer and pianist who specialises in writing music for visuals. Having lived and worked in Amsterdam, Los Angeles, London and Berlin, Aisling has written scores for BBC, Channel 4, as well as for films that have been screened at the Sundance, Tribeca and Berlinale Film Festivals.

AVA’s debut album, Waves, was released in July 2019 on pioneering label One Little Indian Records, which has been a home to the likes of Bjork and Asgeir.

RESINA x CHRISTINA VANTZOU
Despite using different tools, Vantzou and Resina share a musical language and unique approach to composition: this became perfectly clear at their first meeting. From delicately distilled to intensely visceral, both explore the depths of the sound spectrum and the effect is stirring and timelessly immersive.

Christina Vantzou is a Missouri native of Greek descent who resides in Brussels, Belgium. A composer & experimental filmmaker, Vantzou has produced and released four critically-acclaimed albums of ambient-classical music. Her many collaborations have included performing with Mark Linkous (Sparklehorse), co-founding The Dead Texan, creating abstract films for renowned musical artists, and performing with ensembles across 4 continents. The Wire has said Christina has “an artistic eye ahead of her time. Vantzou has translated her surrealistic genius into her solo career’s visual albums… breathtaking visuals embody a dream realm that has been previously unopened until she decided to show everyone.”

Resina is the alias of Polish composer, cellist and vocalist Karolina Rec. Having signed to the pioneering 130701 imprint of FatCat Records, Resina’s debut album was released in September 2016, and she has steadily been making a name for herself through her striking, emotionally-resonant recordings and her powerful live performances. Her sophomore album ‘Traces’ was released in July 2018 to widespread acclaim, with Line of Best Fit giving it 9/10 and describing it as “thrilling and unsettling… A remarkable achievement.” Her latest EP, with remixes by Ben Frost, Ian William Craig, Lotic and Abul Mogard, was released on 31st May 2019. Honed through continual experimentation and seeking out unexpected characteristics of the cello alongside the use of looping, electronics, percussion and her own voice, Resina’s musical style is distinguished by both an adventurous, personal language as well as improvisation.