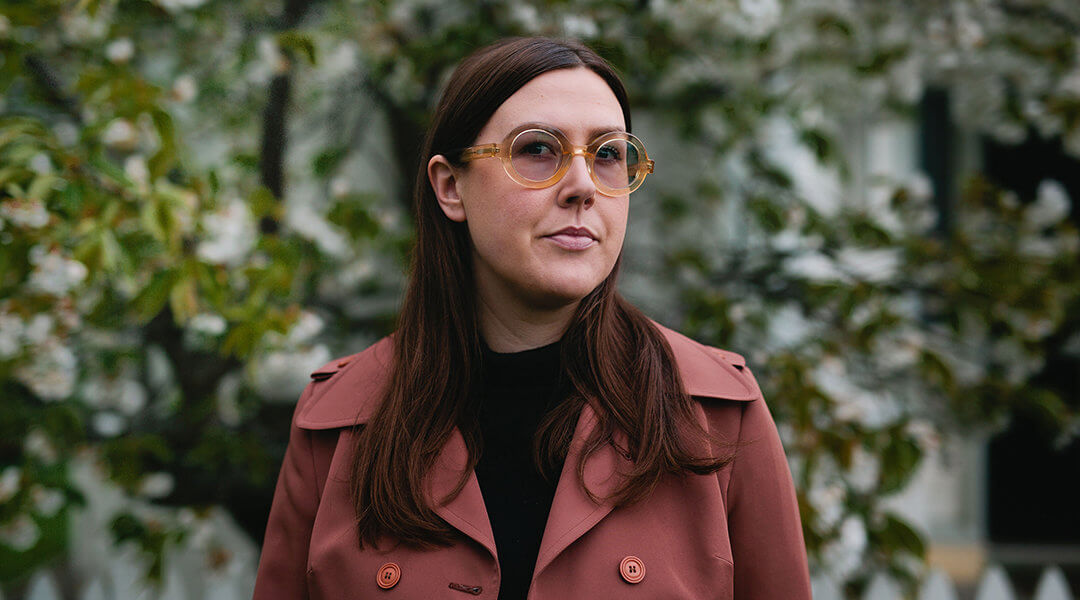 Every once in a while, you discover an artist who stops you in your tracks.

For me, it happened quite literally in 2017. I was at Green Man Festival, walking from one side of the site to another, and had decided to cut through an area known as Walled Garden.

If you’ve never been to Green Man Festival before, Walled Garden is, well, a walled garden, tucked away in a corner of the festival site, with a small stage at the far end of the quadrant. It’s a beautiful setting for live music, and the high surrounding walls make the whole area feel like a world within a world, with its own special atmosphere and an intimate, almost secretive, feel.

On this particular occasion, I remember walking into the area, skipping through lines of people queueing at food trucks, and then suddenly stopping. I’d been brought to a standstill by a song being played by a musician on stage. And I stood, mesmerised, in exactly the same spot, for the remainder of their set, other plans promptly forgotten.

The musician on stage was Nadia Reid.

A singer-songwriter from New Zealand, Nadia Reid is one of a number of southern-hemisphere artists at the forefront of contemporary acoustic / indie music today. She could also, as music writer Laura Barton has written, be described alongside the likes of Laura Marling, Courtney Marie Andrews and Julie Byrne as part of a new wave of ‘female troubadours’ who are changing music by ‘writing songs that capture the pulls of both domesticity and the road, and what it means to be living a life that does not entirely tally with convention.’

Nadia’s first album, Listen to Formation, Look For The Signs, was released in 2015. It’s a beautiful record – one that you can get lost in and which stands up to being played over and over again.

The album’s lead single, Call the Days, (above) is a perfect introduction to Nadia’s music. Journalist Laura Snapes has written of the track:

Love is sold on the promise that it’s better than any solitary satisfaction, so you might as well bet everything on it, time and time again. On Call the Days, New Zealand songwriter Nadia Reid cuts to the heart of this deception: “I was happy on my own,” she sings in a plainspoken lilt. “I would call the days as they were known.” Yet there’s no trace of vengeance in her deep, capable voice, and the surface of her gorgeous song remains steady, as a raga-like drone anchors rolling acoustic guitar and languid cello. Instead, like Laura Marling or Joan Shelley, the self-assurance Reid had once cultivated acts as its own safe harbour, turning the event into a meditation rather than a rupture.

Nadia’s second album, Preservation came out in 2017 and, as Uncut wrote in their 8/10 review, ‘continues Reid’s graceful trajectory’. At its heart, it’s a record about self-discovery and strength, or to quote Nadia herself, it’s about ‘being OK with who I am in the world, and who I want to be’.

Featuring tracks such as Richard, and Reach My Destination and the stunning Aint Got You, Preservation is a brilliant follow up album, and it further showcases Nadia’s skill and inventiveness as both a musician and storyteller. The record received widespread acclaim; MOJO ranked it #2 on their ‘Album of the Year’ list, The Guardian printed not one but two glowing reviews, while music blog The Record Collector described it as ‘simply breathtaking’. And it really is.

Off the back of these two albums, Nadia has earned a global following, and she has spent the last few years constantly on the road, covering thousands of kilometres to play at festivals and venues all over the world. This travelling – the constant ‘newness’ that accompanies life as a musician – has become part of the process. As Nadia has said: ‘An artist must be uncomfortable, must tour the world, and mustn’t stay in her home-town for too long… I’m learning that things need to happen for the writing to come.’

And so it is that the second half of 2019 sees Nadia hit the road again. Following a sold out tour of Australia and New Zealand, Nadia will be crossing the pond for a handful of European shows, and it’s truly a privilege to be able to welcome Nadia to Kenilworth for our 2019 festival, for what may well be her only UK appearance of 2019.

Hope to see you there.

Nadia will be performing a solo show at St. Nicholas’ Church on Thursday 19th September. Tickets are £14 (£12 concessions) and can be purchased through the link below.